Piano tuning is the act of making minute and precise  adjustments to the tensions of the strings on your piano. Contact Steven (Malicki Piano Service (407) 401-2236)  to experience the differnece. I will properly align the intervals between your piano strings and their tones so that your specific piano is in fine tune. The meaning of the term in tune in the context of piano tuning is not simply a particular fixed set of pitches. Fine piano tuning requires an assessment of the interaction between notes, which is different for every piano, thus in practice requiring slightly different pitches from any theoretical standard. Pianos are usually tuned to a modified version of the system called equal temperament.

This list of frequencies is for a theoretical ideal piano. On an actual piano the ratio between semitones is slightly larger, especially at the high and low ends, due to string thickness which causes inharmonicity due to the nonzero force required to bend steel piano wire in the absence of tension. This effect is sometimes known as stretched octaves, and the pattern of deviation is called the Railsback curve.

The relationship between two pitches, called an interval, is the ratio of their absolute frequencies. Two different intervals are perceived to be the same when the pairs of pitches involved share the same frequency ratio. The easiest intervals to identify, and the easiest intervals to tune, are those that are just — which have a simple whole-number ratio. The term temperament refers to a tuning system which tempers the just intervals (usually the perfect fifth which has the ratio 3:2) in order to satisfy some other mathematical property; in equal temperament, a fifth would be tempered by narrowing it slightly, achieved by flattening its upper pitch slightly, or raising its lower pitch slightly. A system of temperament can also be known as a set of bearings.

Tempering an interval causes it to beat, which is a fluctuation in intensity due to interference between close (but unequal) pitches. The rate of beating is equal to the frequency differences of any harmonics that are present for both pitches and that coincide or nearly coincide.

It is heard clearly when the difference in pitches of these coincident harmonics is small (less than 20 hertz (Hz)). Because the actual tone of a vibrating piano string is not just one pitch, but a complex of tones arranged in a harmonic series, two strings which are close to a simple harmonic ratio such as a perfect fifth will beat at higher pitches (at their coincident harmonics), due to the difference in pitch between their coincident harmonics. In the case of an interval that is close to a perfect fifth, the strongest beating will be heard at 3 times the fundamental frequency of the lower string (an octave plus a perfect fifth up), and 2 times the frequency of the higher string (an octave up). Where these frequencies can be calculated, a temperament may be tuned aurally by timing the beatings of tempered intervals.

One practical method of tuning the piano begins with tuning a set of strings in the middle range of the piano to a temperament octave. Once these strings are tuned, the tuner may proceed to tune all other pitches by comparing octave intervals against this temperament octave. This is convenient, because the octave is the easiest interval to tune (having the simplest ratio of 2:1) after the unison (1:1). (These octaves are tuned to have no beating.)

The following table lists the beat frequencies between notes in an equal temperament octave. The top row indicates absolute frequencies of the pitches; usually only A440 is determined aurally. Every other number indicates the beat rate between any two tones (which share the row and column with that number) in the temperament octave. Begin by tuning one note to the other so that the beating disappears, temper that interval in the appropriate direction (either making the interval wider or narrower, see further below) until the desired beat rate is achieved. Slower beat rates can be carefully timed with a metronome, or other such device. For the thirds in the temperament octave, it is difficult to tune so many beats per second, but after setting the temperament and duplicating it one octave below, all of these beat frequencies are present at half the indicated rate in this lower octave, which are excellent for verification that the temperament is correct. One of the easiest tests of equal temperament is to play a succession of major thirds, each one a semitone higher than the last. If equal temperament has been achieved, the beat rate of these thirds should increase evenly over the range of the piano.

The tuning described by the above beating plan will give a good approximation of equal temperament across the range of the temperament octave. If it were extended further, however, the actual tuning of the instrument would become increasingly inaccurate. This is due to a factor known as inharmonicity, which is present in different amounts on all piano strings. The harmonic series of strings does not fall exactly into whole-number multiples of a fundamental frequency, but rather each harmonic is slightly sharper than a whole-number ratio, and this sharpness increases as higher tones in the harmonic series are reached. (Or, more strictly speaking, the overtones of the strings are not exactly harmonic.) This means that an aurally tuned octave will be slightly wider than the just 2:1 ratio assumed above, known as a stretched octave. The amount of stretching depends on the style of piano and is determined mainly by the length of the strings: shorter pianos such as baby grands and spinets will have octaves that are stretched farther than concert grands.

This has the effect that, on a piano, the notes in the higher register will end up slightly sharper than those in the lower octave. This is less apparent on longer pianos which have proportionally thinner strings (string inharmonicity is directly related to the ratio of string thickness to length). Despite this deviation from the simpler ideal equal temperament, this is considered the correct way to tune a piano because it maintains interval identity across the piano, which generally improves the sound of music played on it.

There are other factors, physical and psychoacoustic, that affect the tuner’s ability to achieve a temperament. Among physical factors are additional inharmonic effects due to soundboard resonance in the bass strings, and other effects such as poorly manufactured strings or peculiarities of resonance or bridge shape which can cause beatings in some notes that are unrelated to the tuning and that the piano tuner cannot correct. The principal psychoacoustic factor is that the human ear tends to perceive the higher notes as being flat when compared to those in the midrange. Stretching the tuning to account for string inharmonicity is often not sufficient to overcome this phenomenon, so piano tuners may stretch the top octave or so of the piano even more. 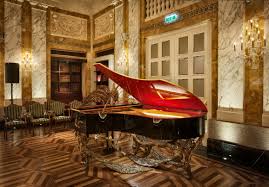